BusinessF1 is published every month (January to December - 12 issues a year) on the last Thursday of the month. It is posted all over the world to subscribers at no extra charge, wherever you live or work.

Facts and attention to details remain the overriding editorial philosophy of BusinessF1. It is reporting without a preconceived agenda of the highest standard, hence the quality of the story telling is consistently high. This is because BusinessF1 writers seek to tell the story behind the story. If it’s good, the good is reported but if it is bad, then we don’t shy away from reporting the bad. There is simply no other magazine like it for providing up-to-date honest analysis. People may not always like elements of it but they always respect it because it is truly independent, with no ties to any organisations working within motor sport. The Editor has total authority and autonomy and only answers to his work colleagues.

The news is primarily delivered in 10 pages every month and has two formats. The World of F1 covers all the month’s news in a double page format, enabling readers to catch-up with the significant events delivered in pithy, brief format of approximately 20 stories in 100 words or less - facts and brevity being the key.

It is followed by up to eight pages of exclusive, behind-the-scenes business news which the magazine is famous for. Over 80 per cent of the stories are wholly original sourced from deep sources we have embedded in most of the significant organisations in Formula One. We rarely report from press releases. BusinessF1 does not employ freelancers and its writers work exclusively for the magazine full time. They have a long-standing reputation of understanding the business of the Formula One industry better than any of the other writers working in Formula One today. Almost all of the news stories are agenda-setting, which is embedded in the magazine’s culture.

Insight stories are the news behind the news in longer format - the really detailed analysis of the main news stories of the month. They are regarded as the ultimate analysis of what is really going on in Formula One. The BusinessF1 Insight writers regularly make predictive assessments of the repercussions of what goes on today, and what it could mean in five or even ten years’ time. The stories are a mixture of issues, information and statistics, with measurements of performance readers will not find elsewhere. Every fact is checked and correlated against reality.

Features in BusinessF1 are the highlight of the magazine. Features are written with a lighter touch, to bring true insight into a subject. The features are rarely critical but for the most part seek to inform. It is the only magazine where you meet the real characters who work behind the scenes, such as the managers, sponsors or agents.  The magazine is light on graphs and pie-charts but is full of tables and graphical analysis, the result of copious research, the quality of which often surprises the editor himself.

BusinessF1 publishes many Special Reports, focusing on matters of the moment in the Formula One business community. Each issue contains at least one Special Report and sometimes two. The reports are a serious editorial project, with in depth independent analysis of the subject. They often extend to 32 pages or more.

There are also two tent pole issues every year. The issue prior to the Monaco Grand Prix is always the biggest issue of the year and the special issue published for the Monaco Yacht Show in September is also an important issue.

There are bi-annual Special Reports on other slower moving subjects such as Trackside Advertising and Circuit Design.

Finally, there are also Special Reports which focus on the individual countries that stage Grand Prix races.

On occasions, the magazine will also cover other related sports such as Nascar, MotoGP and the America’s Cup.

BusinessF1 is renowned for its cover stories, which usually come with unrivalled chronological timelines to back them up. Cover stories can, and have, run to as many as 20 pages. If a subject is covered and worthy of the cover, it is covered properly, regardless of page availability.

BusinessF1’s Paddock Gallery often runs to six pages or more. It publishes over 1,000 photographs a year at every social event in Formula One that matters. There are pages from the Paddock Club at every Grand Prix and the paddock itself. Most of the photos are taken by BusinessF1’s chief photographer, Graham Fudger, who is himself well-known in Formula One. 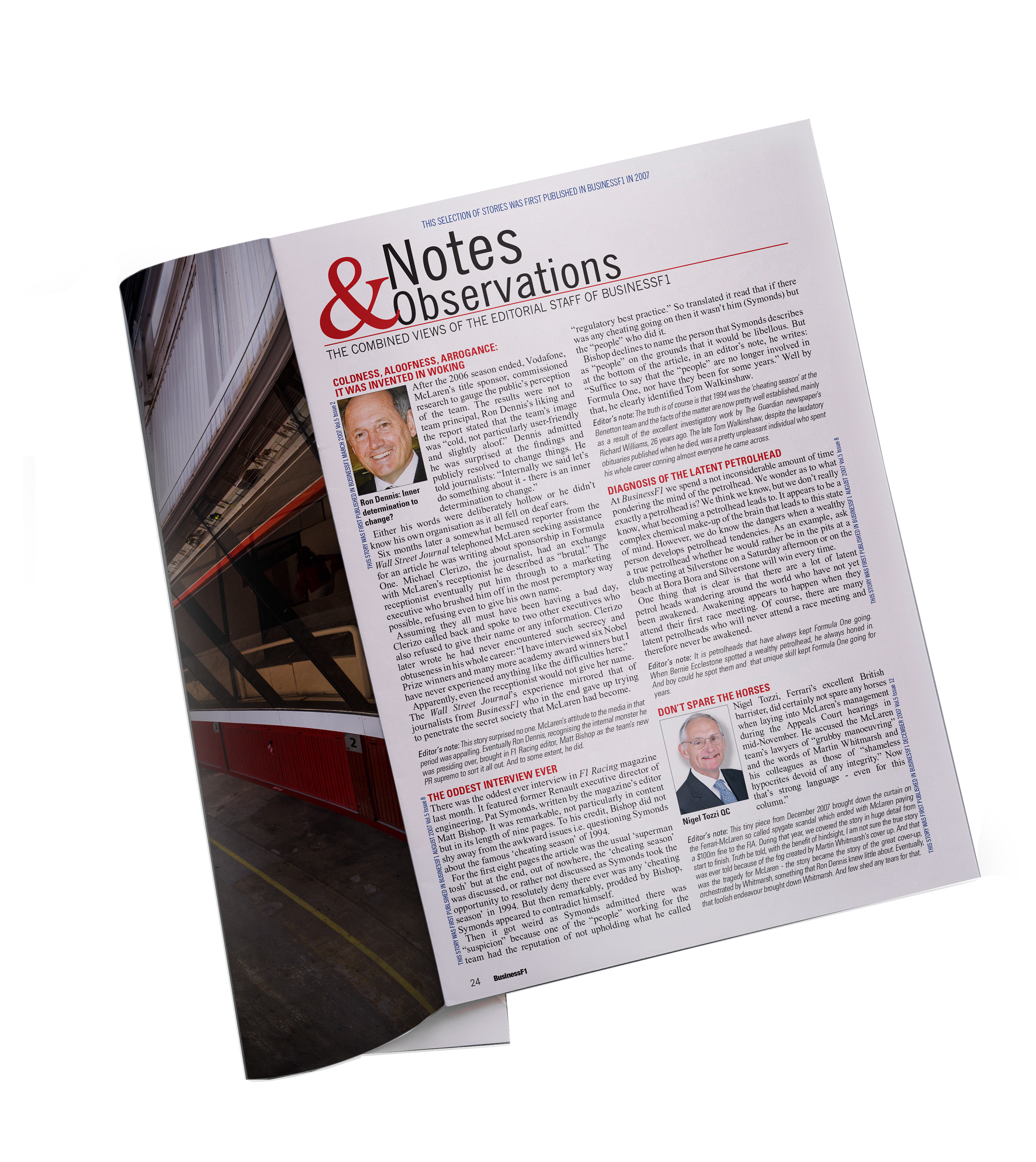 BusinessF1 is famous for its columnists who display a humorous and subversive style. The magazine has five regular columns and each have a distinctive style. Paddock Patter is the Editor’s own column, featuring the serious matters of moment. Notes & Observations wryly reflects the action and movement behind the scenes of current issues. Premature Facts looks ahead and predicts what might be happening tomorrow - Its famous strapline is ‘A rumour is just a premature fact’ and it lives up to that mission statement.

Jottings by The Scribbler is one of the oldest columns in the motoring press, having appeared in many magazines over the years. The Scribbler, now in his late seventies, is a columnist, without equal, writing juicy items of social gossip that would otherwise not see the light of day. Almost every major Formula One personality gets a gentle roasting from The Scribbler at least once a year.

Finally, in 2021 we are introducing Lewis Webster, as a new columnist. Webster tells it like it is in his own unrivalled ‘crusty’ style. Webster’s writing style is in the finest tradition of BusinessF1’s columnists. 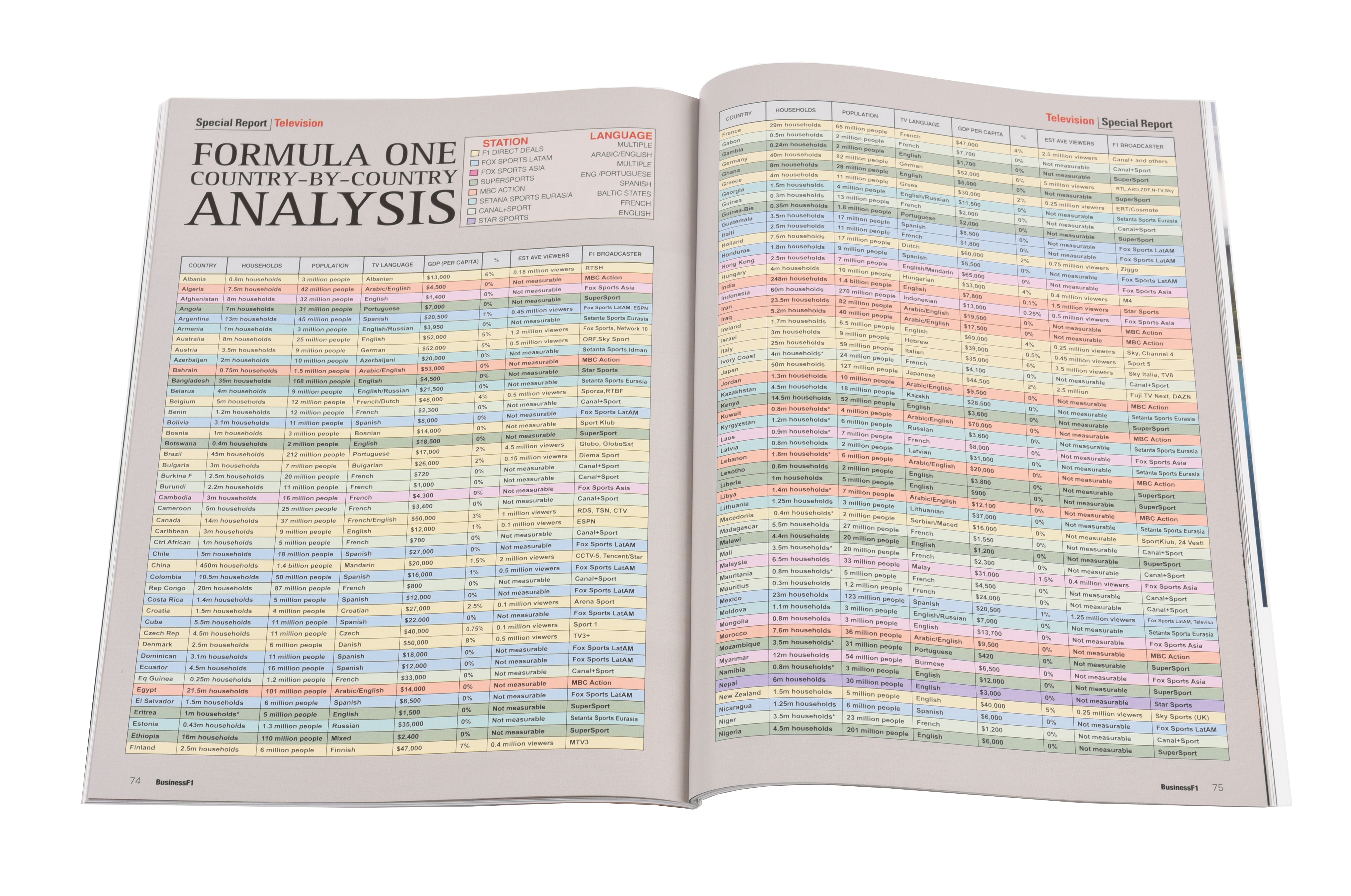 BusinessF1 is the only public source of snap, accurate reporting of TV ratings and attendance figures at races during the Formula One season. At season end, it provides a thorough analysis of all the figures, and in a series of Special Reports through the year it provides an ongoing historical analysis and listing of all the relevant statistics and numbers governing Formula One. The Business of Grand Prix Special Report every March was famous for its detailed analysis, accounting for every dollar of sponsorship revenue in Formula One.